Every single person that visited me whilst I was in hospital commented on the incredible view that I had next to me. It was true, if you looked out just as the sun began to rise in the early hours of the morning the landmarks London is so famous for looked at you in a spectacular fashion as if to say, “today is a new day, chin up”. Yet they were also there in the late hours of the night looking at me as if to say, “maybe tomorrow.”

I have spent most of my teen years in and out of hospital appointments waiting for the inevitable to happen, when I was 14 the spinal surgeon looked me dead in the eye and told me the risks of spinal fusion surgery, I was terrified but in my eyes I had no other choice. I vaguely remember the 9th January 2014, aged 15 and losing consciousness as the anaesthetist counted down from 10, my mum in the corner crying and my final happy thought being Harry Styles (obviously still getting my priorities right even then) and that was it. 9 hours later white lights, alarms, my dad’s voice. Everything was whirling around my brain but I just couldn’t see it, was I dead? I was disappointed; Harry Styles was not dressed as Jesus welcoming me through the gates of heaven. All I could hear was babies crying. Then my mum came into focus, nothing made sense to me.

I spent 3 days in intensive care, everyone who saw me in there told me they left in tears. Then I was transferred to the children’s ward which was the start of my real struggle. I’m very lucky to have such amazing and supportive people in my life who travelled the depressing distance to see my so often. They know who they are and I love them for being there when I needed them most. My mum always says that one of my best assets is that I always put on a great front, when I had visitors I tried to be as close to normal as I could, with sarcasm and a smile. But it was different when I woke up every day knowing I would have to lie for endless hours until my friends arrived and when I was made to try and walk a little bit but two steps were taken and I continuously collapsed due to severe anaemia.

Everyday people would come and go, some kids there for a day, a few nights but there I was part of the furniture. I was at the lowest point I think I could ever be. One afternoon when the pain medication had been administered and I was awake a woman I had never seen before sat in the chair next to my bed. “I’m a children’s psychiatrist” she told me. Doctors are very intelligent people, obviously. But what they know about the human body definitely eclipses their knowledge they have of human emotions. I didn’t want to talk about how I was feeling, I don’t even do that when I am a fully functioning person. I just wanted to get better. Weeks and weeks later I was still in that same bed, collapsing at every area the hospital had to offer, whenever I was stood up.

Needles, tablets, examinations, scans, learning to walk. It never ended. My mum, a nurse of 30 years, cared for me, fed me (though it never stayed in my body long enough for me to digest it) administered medication, washed me, dressed me, brushed my teeth. As someone who was far too independent for their own good, I turned into a baby disguised as a teenage girl. It was soul destoying.

One moment that will always stick in my mind was one day a young boy moved into the ward. I was in a ‘I hate everyone mood’ and he asked me why I was there. I told him and he turned to me and said. “You’re very brave, I’ve had a lot of headaches and had a scan today. They say I have a brain tumour, I’m having an operation tomorrow.”It messed with me that this boy was in this position and was telling me I was brave. I never saw him again but I think of him often. He changed my outlook on being in hospital. I was discharged a week later but returned to hospital shortly after.

A kid in hospital sees a lot of things they should never have to see or experience. It affects them, everyone around them and the emotional scars stay with them a lot longer than their physical ones. I speak about my operation when asked but the dark days of 2014 that no one else has seen, never seem to find their way into the conversation. As always, my words come out so much better on a page, than from my mouth.

It gets better. It always gets better. Over a year since I was in hospital I can do everything for myself again and I am so much stronger for it. I made it, and overcame the days that never seemed to end. I returned to the ward recently for a check-up. The view from here is incredible, isn’t it? 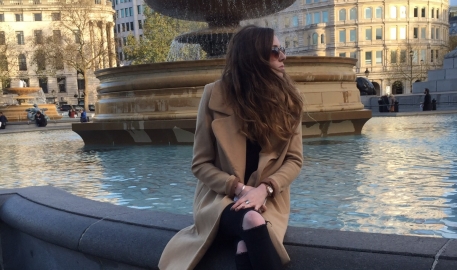