After taking a nonchalant approach to the obvious appearance defects and chronic aching of scoliosis that I had lived with for several years since reaching puberty, I received my diagnosis at the age of 14. It had reached the stage where people were starting to point out my rib cage hump and ask what was wrong with me: something I had until then naively thought to be trivial, like having a tooth-gap or short fingers.

Subsequent X-rays revealed that the curve was too severe to be dealt with by any remedy other than spinal fusion. I came to meet older, long-term sufferers and it didn’t take me long to decide that this was the only answer. The idea of surgery and hospitals never phased me but uncertainty over how different I would be afterwards did. I felt as though I would genuinely wake up a reborn person. Half way in to being a bratty 15 year old, my 80 and 45 degree curves had been fused and I got my answer.

I’ve come to realise that there is so much you can look up about what the surgery is like (if you’re as daring as I was, you can even watch it on YouTube!). There are so many places you can read about the hospital experiences of others, so many kind patients who blog their stories and continue to do so for months afterwards. Sadly, there aren’t many places you can read up about how rods change your life in the long term. This is a key part of the bigger picture that shouldn’t be ignored when making up your mind if surgery is what you’re facing.

Current 20 year old me doesn’t even think about the fusion unless it comes up in conversation. At first, the rods were a whole lot of pain as it took a long time to properly adjust to and get my strength back. For several weeks it felt a little as though I had been stretched, beaten up and that an invisible pair of hands were wrapped around my spine. The year-long waiting game for bone fusion to complete was deeply frustrating when I felt like I was sat at home missing out on my GCSE year. However, I still ended up passing with flying colours and in the grand scheme of things a year is very little. I had numbness in various parts of my body due to the severity of the scar but this very quickly receded to being just the skin around the upper half of my scar. Although once red and feisty to look at, these days my scar is neat and pale and goes unnoticed by many.

With a late diagnosis, I was lucky enough the miss the bracing stage of going through scoliosis in puberty, so I never had to deal with hiding it under clothes. Despite this, I was no stranger to seeing the bulge of my rib cage hump under figure hugging clothing. The severity of my curve meant that the lower border of my rib cage was touching my hips, leaving me with long legs and a dwarfed torso that I was particularly self-conscious about.

These days, I have the remnants of the rib-hump due to rejecting rib-cage thoracoplasty (an operation to remove part of the ribs that stick out) but you wouldn’t notice its presence unless you knew what you were looking for. Growing three inches in one day gifted me with my proudest cosmetic achievement: a waistline. As shallow as that seems, being able to wear tight clothes and look proportional instead of stumped means I haven’t once felt self-conscious about my post-operative body. The only niggles I can raise about myself these days are completely unrelated to scoliosis and more linked to excessive Christmas bingeing or how alcohol gives you spots. It’s nice to not have to care about my image the way that I used to.

It could be easy to sit back and succumb to ideas of incapability and fragility once you’ve had the rods inserted. I will always be protective of my spine and wary of any activity that could put my back at risk, just as I would have been had my spine remained unfused. However, if anything the rods motivate me to push my physical capacity further. I was never a PE loving child and would take any excuse to wriggle out of it, but now I find myself with a gym membership, which I use to do weekly pump and yoga classes to test my strength and flexibility.

There will always be activities that I have to back down from and I have to give professionals such as masseuses or instructors warnings about my back’s status before they work with me. Luckily it is a significantly reduced amount of experiences that I have to turn away compared to the pre-op days. As long as someone is fore-warned, there is nothing stopping me from participating in activities like ski holidays and indoor sky diving. I may be ‘propped up’, but I will not allow it to become a disadvantage.

As for little aches and pains, they naturally still exist, but to nowhere near the same extent as before. A lot of literature claims that scoliosis is not accompanied by back pain and I will always argue against this – it is different for each individual, but I certainly do not miss the gnawing ache in my right shoulder blade and left hip from when my curves still existed. I still get aches in the back of my neck from long periods of studying, as well as the occasional episode of lower back tension if I haven’t been sleeping well or I’ve been doing a lot of load-bearing. A good massage and relaxing activities are great combatants to this.

When I read up about the long term complications that can come with severe scoliosis, it scares me to think about how I might be now or further down the line had I not had the surgery. As things are, I can hopefully expect my pain levels to remain consistent, no further complications and for life experiences such as childbirth to not be an issue should that be what’s in store for me one day.

My scoliosis diagnosis changed the course of my life in ways I did not expect. Being on the orthopaedic ward introduced me to practitioners who quickly influenced my scientific aspirations away from ideas of laboratory work and towards practicing medicine. Almost five years on, I find myself coming towards the end of my first year at medical school thanks to the realisation that came from my hospital experience and a personal statement heavily comprised of further reading I had done on scoliosis and orthopaedic genetic defects.

Often the perks of the operation are in the small details. You can’t deny that having two metal rods in your back is the perfect get out clause for that rollercoaster you really don’t want to go on with your mates, and the free orthopaedic mattress that my University Halls provided me with is the icing on the cake after a long day of lectures. My inability to slouch and alleged ‘indestructible spine’ is a recurrent joke amongst friends. I get deeply enthralled in conversation with anybody who is brave enough to ask me about my scar and you can guarantee that within minutes I’ll have my x-rays up on my phone to proudly show them what I looked like. Since starting medical school, this has become an almost bi-weekly conversation that I have yet to tire of.

All in all, as pretentious as it sounds, my life was totally transformed by spine fusion, whilst letting me remain functionally the same if not better. There are still some of the same restrictions upon me but nowhere near as many as before. I’m still able to keep up all of my pre-diagnosis hobbies, just with precautions, such as horse riding with a thick body protector. I lead a regular student life of studying, socialising and nights out without crippling back pain. I don’t find my student loan getting drained from having to buy specialist equipment or excessive quantities of painkillers. These are some of the things that I wish someone could have reassured me about before having the surgery. 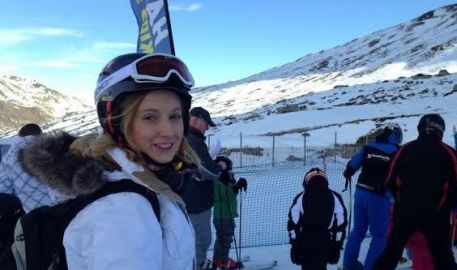