Emma’s son Bertie was born with a 34 degree curve, considered severe in someone so young, and had progressed to 55 degrees before casting was advised. After 22 months in a cast his curve has reduced to 30 degrees. Emma shares her advice for taking care of a child in a cast.

When Bertie was born, I instinctively knew something wasn’t quite right with his back. Babies are so scrunched up when they’re born that I was hoping it was just that and not something more serious. He had all the standard baby checks and everything came back as normal so I tried to put it out of my mind. When he was 12 weeks old, he was admitted to hospital with an infection. One of the nurses who took him for a lumbar puncture asked if I was aware of any problems with his back – I wasn’t. When the consultant came to see us, I asked her to have a look at Bertie’s back – I was petrified but knew it was the right thing to do. There was no going back and I had no idea what may happen. She examined Bertie and I heard the word scoliosis for the first time – his suspected diagnosis. I had heard of the condition but had no idea about what it really was and what it meant for the future.

When we first saw the spinal surgeon, we were told to watch and wait until Bertie turned one as they were hoping his spine might correct itself as he grew. When we returned we were told that his curve had not corrected and had in fact progressed. He was measured for and fitted with a removable brace at the age of 14 months.

Fast forward to January 2018 when Bertie was 18 months old and I was given the news I was dreading; Bertie would be upgraded from a removable brace to a permanent plaster cast jacket (POP) jacket. His curve had progressed again. I was shocked, worried, upset, panicked – a whole range of emotions. I had no idea what to expect. How would he cope? How would I cope? What impact was this going to have on us? Nappies, clothing, washing – what was I going to do?

I started researching but as casting is relatively rare, I struggled to find the answers I was looking for. Our casting journey so far has been a massive learning curve for Bertie and I, as well as his older sister Eva (who is 5 years old) and we’re still learning as we go along.

We arrive on the ward at RNOH Stanmore at 7am the day of casting. Bertie is checked over by the nurses, paediatricians, the spinal team and anaesthetists. He’s usually first on the theatre list due to his age and we usually head down to theatre about 9am as soon as we’ve consented to the procedure.

I stay with Bertie as he’s put to sleep in my arms, I then hand him over to the anaesthetist and leave theatre. This is when I head to the restaurant for breakfast – usually a fry up – it’s the only thing I look forward to on casting day! It’s a long and busy day so I’ve realised to eat in peace whilst you have the chance is the best thing to do, plus it takes my mind off things whilst he’s under anaesthetic.

Whilst in theatre Bertie is put in traction (a big metal frame that looks a bit medieval) where his spine is manipulated into a better position then he is wrapped in Plaster of Paris. The cast looks like a vest, it has shoulder straps, is solid all the way down the back, has a cut out for his tummy and chest and goes down to the tops of his thighs.

The process normally takes between 1 ½ and 2 hours but can vary and is longer if he is also having an MRI/CT scan.

Once he’s in recovery the nurses take me down to meet him and as soon as they’re happy with his observations and breathing we are taken back up to the ward.

He then has regular observations – every 15 minutes for the first hour then hourly after that. He can eat and drink as soon as he’s ready and this is monitored by the nurses. Once he has passed urine his canula is taken out.

Then it’s off to plaster theatre for the team to check that the cast is fitting correctly and it’s not irritating his skin. We check he can sit up unaided and often the cast needs trimming a bit at that point to enable him to do so properly. They can also flare out the cast if needed and I usually ask them to do this around his tummy and chest hole. Finally, we go for an X-ray to check his spine is in the correct position in the cast. Once this is all completed – usually around 5pm – we are discharged and can go home.

The biggest challenge with casting is keeping it dry and clean. If the cast gets wet, this can alter the shape and therefore impact its viability. If the cast ever gets damaged it has to be removed and replaced via the above process in hospital – stressful and time consuming.

There are various tips I’ve picked up on our casting journey so far – mostly through trial and error. I always buy a size up on tops as they have to go over the top of the cast. This isn’t always necessary for trousers; I find if the trousers have a stretchy waist the same size is normally ok. The casts can vary in size and shape so I tend to go shopping soon after a cast fitting rather than before.

I buy nappies with extra absorbency and size up for night time. I put them on under the cast and tuck them up as far as it will go. When Bertie was younger and passing urine more frequently at night, I would tuck a reversed nappy around the belly bar for extra protection. For our first cast I was told by the plaster team to set alarms throughout the night to check his nappy. I did this for the first cast and some way through the second but then I stopped as I was exhausted and had realised by then that he would generally pass urine just before he woke up! In the case of a tummy upset I will tuck an extra nappy up the inside of the cast as far up the back as I can get it.

I always buy bibs with waterproof backing for eating/drinking, I also find neckerchief bibs handy to ensure no crumbs fall inside the cast (in winter I tend to automatically put a neckerchief bib on with his clothes first thing in the morning and leave it on). I use a painting bib for any messy play but honestly, I try to avoid messy play altogether. Activities like this can damage the cast – especially if he’s only just had one applied. I also use duct tape to give the cast an extra layer of protection, especially as the tape is waterproof.

If I suspect any crumbs have fallen down the inside of the cast, I floss it with a pair of tights. I will floss occasionally anyway; Bertie loves it but I have to be careful not to overdo it as his skin is very sensitive underneath and the last thing you want is any sores developing.

Items I can’t do without:

• All in one rainsuit/ waterproof (as we also have to be very careful when out in the rain, especially if it’s torrential)

Washing is extremely tricky; Bertie is obviously not allowed a bath when he’s in the cast so I have to wash his hair at the kitchen sink! I layer a waterproof bib, children’s hairdressing cape and towel over his cast, then lay him on the kitchen draining board supporting his neck over the sink, I then wash his hair using a sponge and bowl of water. I then twizzle him round and let him dip his feet in the bowl (he’s learnt not to splash too much) and sponge his arms and legs. In between washes I have Nilaqua towel off shampoo and body wash which are excellent for a quick and easy freshen up.

In the summer the heat can be really tough on Bertie. The cast acts as a lot of layers so I have to keep him as cool as possible. I looked into buying a cooling vest but they are very expensive so I came up with my own invention – a swim vest with removable floats that I replaced with medical gel ice packs. It works a treat and Bertie loves wearing his special vest.

I’ve found a few forums on Facebook helpful, there are a couple of American-based groups which have the most information about casting.

Bertie took about a week to adjust to his first cast. He was very grumpy initially but adjusted much quicker than I anticipated. Each subsequent cast takes about two days to adjust to normal. His balance can be quite off whilst he gets used to the new shape and weight of each cast. Bertie has additional medical diagnoses and was unable to walk before his casting journey began. Now at the age of 3 ½ he has started to take independent steps although he is still very wobbly and is unable to walk on uneven surfaces.

Although the cast stops him from doing certain things, he has managed to still do most ‘normal’ activities like climbing up on everything at home! I try not to stop him from doing things but there are restrictions on certain activities, he’s not allowed to go on bouncy castles or trampolines.

I’ve not noticed a huge change in his sleep since we started our casting journey. To begin with he was clearly uncomfortable overnight and as I set regular alarms to check his nappy this disturbed him. He has sleep apnea and some ENT issues so often has disturbed nights anyway. I was advised it may help to switch to a memory foam mattress but I didn’t find this necessary and was concerned that with the weight of his cast he may find it difficult to roll over in his sleep if he sunk into the mattress.

At the start of our scoliosis journey, Bertie’s curve was 34 degrees (considered severe in someone so young) as we started our casting journey his curve had progressed to 55 degrees. All of his x-rays so far have been lying down as he’s unable to stand for long enough which means his curves readings are probably better than if he was standing. Bertie has been casted for 22 months so far and he is now holding at about 30 degrees in cast but he is yet to have an out of cast x-ray. It’s been quite the journey for myself, Bertie and Eva and I know this is just the beginning. I know it’s the best thing for Bertie but it’s hard. It’s difficult not knowing what the future holds and that’s the worst thing about scoliosis, it’s so unpredictable and everyone’s situation is different. The thing is, when you’re a parent going through this, it is so tough but the strength my son shows dealing with it all constantly amazes me. 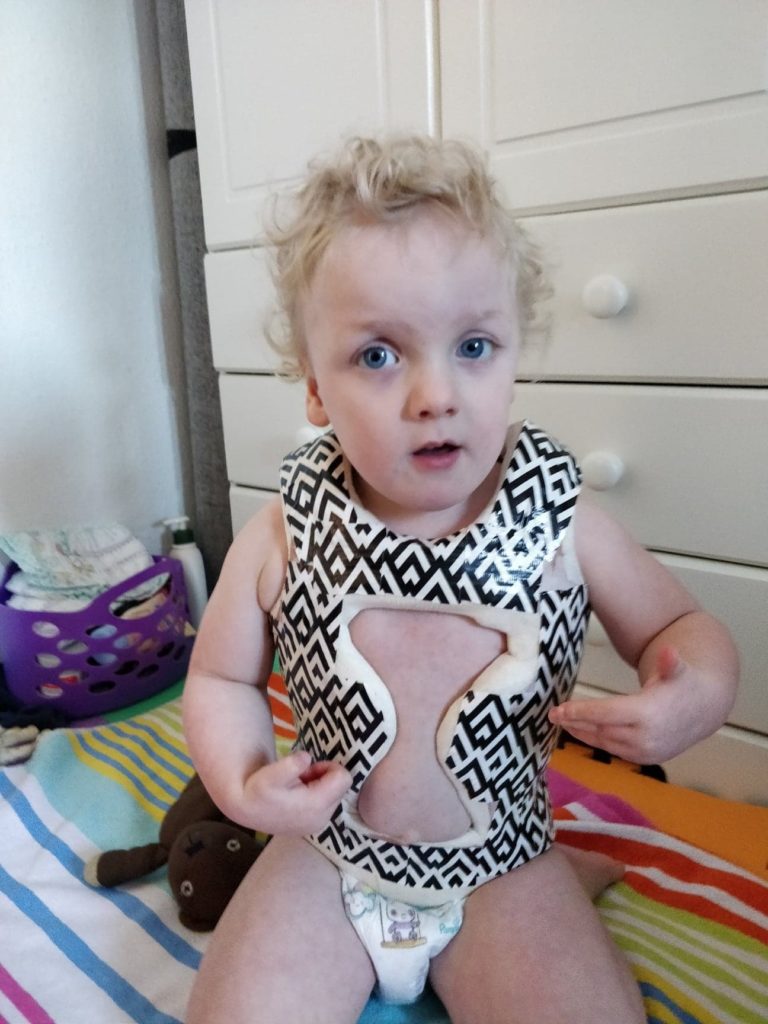