Donna and Jody’s baby, Charlie, was just 3 ½ months old when he was diagnosed with infantile scoliosis. They waited anxiously for another 3 months to see if his scoliosis would self-resolve, but unfortunately it was progressive. They have shared their insight into the casting process and treatment with us.

Finding out that our tiny little baby had a potentially life-threatening condition was absolutely
devastating… Charlie was just 3 ½ months old when he was diagnosed with Infantile scoliosis. There was an 80-90% chance that his curve could self-resolve, so we hoped and prayed that the odds were in his favour. We were advised by the consultant to wait and watch for the next 3 months. Unfortunately, the second X-ray 3 months later revealed that Charlie was in the 10-20% of cases that were progressive. At just 7 months old Charlie’s curve was at 42 degrees. Charlie required treatment immediately. As parents we were so scared. We were afraid of the unknown, and what lay ahead for Charlie. We were told that Charlie needed to go into a plaster jacket immediately. The aim of this jacket was to try to hold
the curve until Charlie would be old enough to assess the need for spinal surgery.

After many days and nights of tears, we began to research and discovered a treatment that could potentially correct the curve in Charlie’s spine, instead of just holding it. We contacted Shriners Hospital for Children in Philadelphia, and Charlie was soon accepted for treatment using Mehta’s Growth Guidance Casting (MGGC). During the first 2 years of life the human body grows at an extremely rapid rate. MGGC harnesses this vigorous natural growth as the corrective force and creates the possibility for young spines to grow straight three dimensionally.

At just 9 months old Charlie received his first Mehta cast under general anaesthetic. I won’t lie… it was a huge adjustment for not only Charlie, but for us as parents too. Charlie had no idea why his little torso was wrapped in hard plaster. It was now up to us as Charlie’s parents to help him adjust and make him as comfortable as possible. Those first few days and nights were rough. Charlie cried, and we cried with him. But after those initial few days it soon became apparent that Charlie had accepted his new ‘norm’! Yes, life is different for a child in a plaster cast, but I can assure you, it certainly won’t hold them back! Charlie had 12 Mehta casts over 26 months, and he never let anything get in his way!

Waking up in the recovery room, Charlie was always upset. He had a brand new cast in a colour of his choice and the team at Shriners quickly tidied the cast up, ensuring there were no rough edges that would irritate his skin. We always kept a bib on him in case he was sick after coming around from the anaesthetic so this kept him and the cast clean until we got him dressed. We always made sure to check the cast over thoroughly before we left, just in case any adjustments needed to be made.

After Charlie got his first cast, we wanted to make sure he had a car seat that was comfortable. Each child and their cast is unique, and what car seat may work for one, may not work for another so I would definitely recommend waiting until after the first cast is applied before deciding on a car seat. We chose the Cybex Sirona car seat which fitted him perfectly, and we’ve had it for 4 years now!

Charlie learned to crawl in cast and he learned to walk in cast. I was always nervous for the first few days of each cast, because he could be a little off balance. With each new cast he had applied, he had a new centre of gravity. And once he adjusted to that his balance was perfect, and then I could relax a little more.

When we got back home after each trip, we got Duct tape and decorated Charlie’s casts. This made them a bit more fun and colourful, and it also made them wipeable too – this was great, especially with a messy toddler! At mealtimes, we always used Bumpkin bibs on Charlie, so as not to get any crumbs or food underneath the cast and to keep him clean. We always had to be extra careful that nothing got in below the cast. In the event of this happening, unnoticed by us, it could cause skin irritation or breakdown. In some extreme cases, skin breakdown can lead to extra time out of cast, which therefore delays treatment. Thankfully throughout our 26 months of casting we never had any unwanted objects in below the cast, nor skin breakdown either.

At times, Charlie would get itchy and loved getting his back scratched but we just couldn’t reach down and scratch his back, so we had to improvise. We cut the leg from a pair of fine ladies tights, and threaded this underneath the cast. Charlie lay on his belly while I ‘flossed’ the material up and down. This helped to relieve any itch that Charlie had, and it also removed any crumbs and dirt that were under the cast. Charlie absolutely loved this too!

Bath times were not always fun. When Charlie was little, it took two of us to bath him. I held him in my arms while Jody washed his hair and body. Poor Charlie screamed every time, and over time, he developed a fear of the water. As he got older and heavier, we washed him at the kitchen sink. We rolled a towel up and put it under his neck so we could wash his hair, again he hated this. But we tried to make it as fun as possible with all sorts of bath toys. We sometimes let him sit on a chair in the bath so he could splash his feet and play. But with the cast, we had to be so careful not to get the cast wet. Any water near the cast could compromise its integrity.

Charlie’s casts were changed every 8 weeks under general anaesthetic. We removed the cast 48 hours before he was due to get his new one, and then he was allowed to take a proper bubble bath. We applied lots of Aquaphor to help take any redness or bruising out of his skin, and to prepare it for the next cast.

Over the 26 months that Charlie was in cast, he developed very strong little legs. He used his legs a lot to get up and down from the floor. His movement around his torso was restricted, and he couldn’t twist left or right, or bend forward or back. His flexibility and range of motion was limited but he adapted, and did things using the range of movement he had.

Charlie was always a fussy feeder. He never really wanted to eat. But with being in cast, we had to feed him little and often. His little tummy was restricted by the plaster, so he couldn’t eat very much, and if he did eat too much his little belly would swell making him uncomfortable.

never thought I’d say this, but we are lucky here in Northern Ireland that our summers aren’t too hot! While Charlie was in cast, we had to make sure that he didn’t overheat. He wore fewer layers than his siblings during the warm weather because too many layers could cause him to overheat. If it did get too hot, we just kept him indoors. But thankfully there weren’t too many days like that, and he was still able to get outside and play with his brothers and sister.

Charlie was still in nappies while he was in casts, which was something completely new to me, and I had to try and figure out what would work best for him to keep him clean and dry, and to keep the nappy on. It took a bit of trial and error before I finally mastered what would work for us for the next 26 months. I always changed Charlie on my knee and we used two nappies: a small size, which I took the sticky tabs off the sides and tucked under the belly bar at the front and under the back of the cast. Then I used the next size up nappy, and put it on over the top of the smaller nappy, and over the outside of the cast, and this held the smaller nappy in place. It wasn’t just a straightforward nappy change, but it worked for us, and thankfully we didn’t have many accidents over the 26 months.

Before Charlie began his casting journey, we were scared and afraid of the unknown, and of course it’s only natural to feel that way. But Charlie adapted to life in a plaster cast like a true warrior and we as a family adapted with him. Cast life is challenging but it ’s doable!

Each unique Mehta cast that Charlie had applied, allowed his little heart and lungs to grow and fully develop. It held his little spine straight, and guided it to grow straight. Mehta casting saved Charlie’s life.

Editor’s note. This technique was developed and practised by the late Miss Min Mehta, FRCS, at RNOH, Stanmore. Min was a long time Trustee of SAUK and is much missed by us and the many patients she cared for. 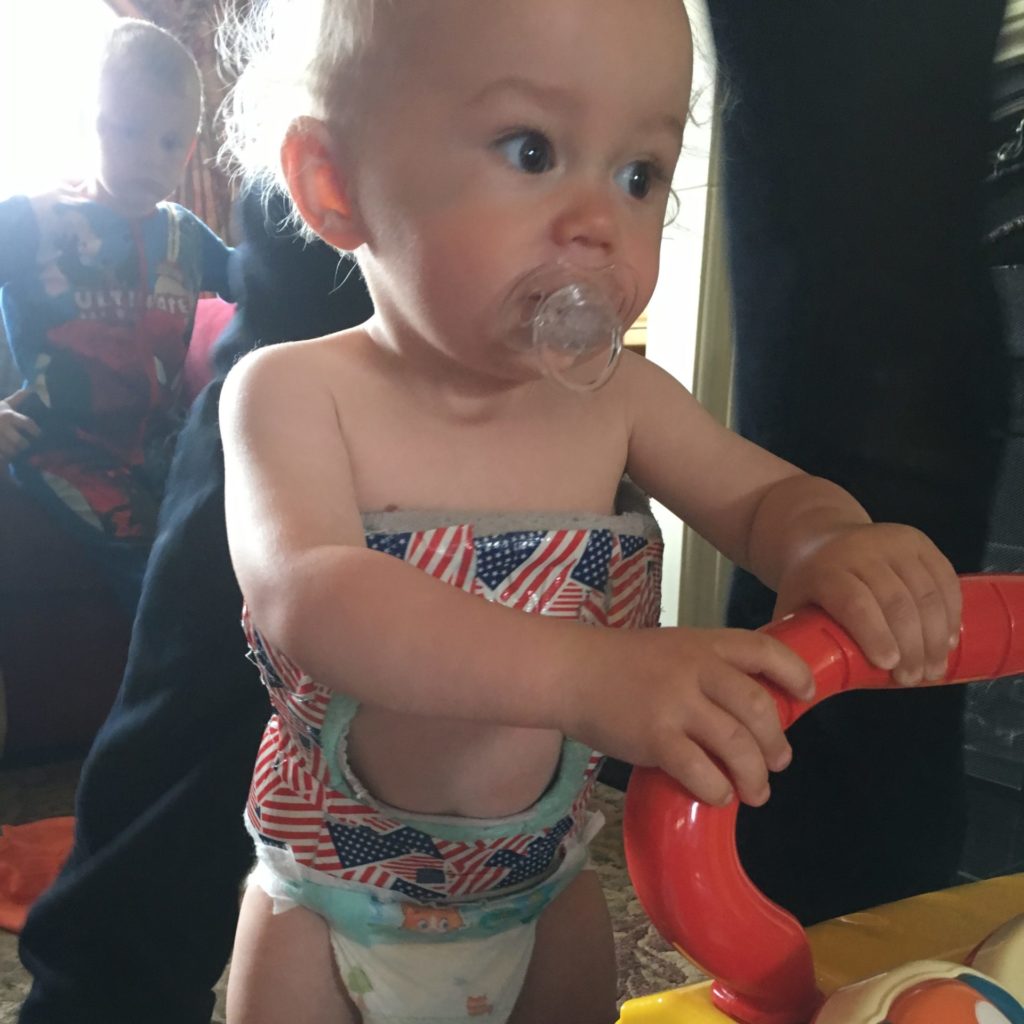